One of the Suggested Activities in Peachtree’s teacher’s guide for Fault Lines in the Constitution asks students to “identify a current event that relates to the Constitution and write a blog post about it.” That’s what we, the co-authors, do on this site twice a month. Just as we did in the book, we show the connection between thorny issues today and the decisions the Framers made in 1787.

That’s also the basis for the Blog-a-Fault-Line Contest we’re holding. Entries are due April 16. Winners’ blogs will be posted on this site, and their schools will get a free Skype visit from us!

That activity might seem daunting if you’re just beginning to learn about ways the Constitution influences our lives. But the task may be easier than you think, especially if you read Fault Lines pretty carefully and become familiar with the issues. In addition, we thought we’d give you some guidelines on how to follow the dots backward from current events to fault lines in our country’s founding document. Here are steps you can take to understand the connections and help you prep for the contest:

1. Review the true stories that open Chapters 1 through 18. These stories not only illustrate the problem discussed in the chapter but they also show you the kinds of events to consider. For instance, Chapter 7, which focuses on direct democracy, opens with the story of Jennifer Gratz, a high school senior who believed she wasn’t admitted to the University of Michigan in Ann Arbor because of the university’s affirmative action program. She helped organize a petition drive that led to an election in which voters abolished the program. That action was possible because the Michigan state constitution allows for direct democracy by its citizens.

To write a post on this issue, you might think about actions the national government is—or is not—taking these days that you disagree with. Would you like to be able to organize your own petition drive and, ultimately, a national vote on the issue? Would you revise the Constitution to allow “the people”—not just Congress—to revise or repeal laws? Along the way, you might also find out what your state constitution allows. Or, consider the situation in other countries. As an example, check out our blog post on direct democracy in Venezuela called “Let’s Throw the Rascal Out!”

2. Update a sidebar. Almost every chapter contains additional information in a text box called a sidebar. For example, a sidebar in Chapter 6 points out that Puerto Rico, like Washington, DC, does not have a voting representative in Congress. After Fault Lines in the Constitution was published, Hurricane Maria devastated this island territory and its more than three million American citizens. We wrote a blog, “Citizens in Need,” about the ways that a member of Congress might have been able to argue for and secure aid for its residents. 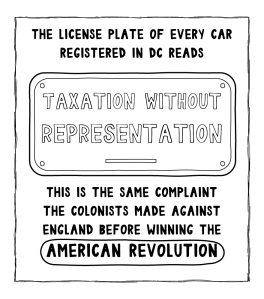 3. Update the graphics. Almost every chapter also displays information in a graphics box with numbers and pictures. For example, a graphic in Chapter 2 on the Senate shows that in 2016, 150 million people were represented by eighty-two senators while 158 million people were represented by only eighteen senators. That means that more than half the population gets less than one-fifth of the Senate. As the population has grown and moved in the last two years, has this situation changed? What’s the prediction for the 2020 census? You might also look at some recent actions by the Senate and figure out whether the majority of senators who voted for (or against) a particular bill represented a majority of the population of the country. If not, is that a problem? 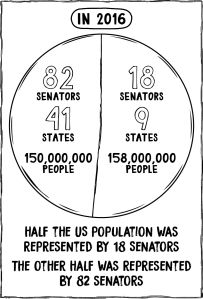 4. Consider differences from state to state. We’ve written a lot, both in our book and in our blog, about inconsistencies across the country. One example concerns the right of former felons to vote. The blog post “Should You Be Allowed to Vote If You’ve Broken the Law?” points out that Maine allows felons to vote while in prison, whereas most states prevent them from doing so even after they’ve served their time. Another example of inconsistent practices across the country deals with the Electoral College. Are these differences fair? How does your state fare?

5. Think about local or state issues where you live. Does your town have limits on who can run for mayor or city council? If so, do they make sense to you? How do they compare with the restrictions on running for congress that we discuss in Chapter 9 or the restrictions on running for president in Chapter 10? Our blog post “Run, If You Can,” in which we discuss a thirteen-year-old who is running for governor of Vermont, shows how to connect these issues to the Constitution.

Another example relates to gerrymandering, which we describe both in Chapter 5 and in our blog post, “Gerrymandering: Will It Ever End?” How does your state draw congressional boundary lines?

6. Find a Fault Line we didn’t write about. If we were writing the book today, we might discuss the president’s pardon power, including whether he can pardon himself. What do you think? Another current issue concerns attempts by Catalonia to secede from Spain. The US Constitution does not address whether states could secede from the union. Is the Constitution’s silence a fault line?

7. Grade the Constitution. We do it and, in Chapter 19, invite you to, also. We’d be delighted to read your assessment of the Constitution’s strengths and possible weaknesses.