Fault Lines in the Constitution: The Framers, Their Fights, and the Flaws that Affect Us Today went to print on June 15, 2017. (Listening Library started the process of recording the audio version several days before that.) We updated the manuscript until practically the last instant.

But, of course, politics don’t stop just because a book goes to print. The main purpose of this blog is to update our readers on developments since mid-June. And a lot has already happened!

We could tell you about recent action or reports on

Instead, we’re going to catch you up this time on the constitutional fault line known as gerrymandering, which we discuss in Chapter 5. Gerrymandering is the process of redrawing the borders of a congressional district to favor the members of one party or racial or ethnic group.

The Framers gave the states the responsibility for planning and holding elections, though they did give Congress the right to pass laws in the future to regulate elections.

And many states have chosen to manipulate their districts in unusual ways, in order to influence who gets elected to the House of Representatives. 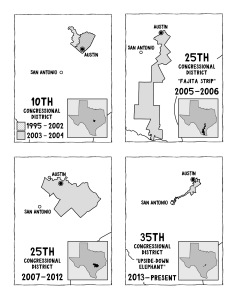 We introduce the practice of gerrymandering by telling the story of Lloyd Doggett, a multiterm Democratic congressman who represents a bunch of different places in Texas. How can he represent a bunch of places? Because the state legislature keeps redrawing the boundaries of his district. These maps show the five different parts of the state, from central Texas down to the Mexico border, to which he’s been assigned over the years.

Why did the Texas state legislature, which is now largely Republican, give him new constituents every two years or so? Because they hoped to replace him with someone from their own party.

In the last couple of weeks the Supreme Court has started weighing in on the issue of gerrymandering.

First, the court agreed with a lower federal court that had determined that North Carolina had engaged in racial gerrymandering. That’s unconstitutional, the high court confirmed.  In addition, the justices told another lower court to decide whether North Carolina should hold special congressional elections this year. That means some of the districts might be so gerrymandered that some of the state’s representatives don’t represent the views of the voters and should be replaced.

Second, the Supreme Court may well decide soon whether Wisconsin has been engaging in partisan gerrymandering. As an example, in 2014, 52 percent of the voters in the state voted for Republicans. But because of gerrymandering, more than 60 percent of the state’s Assembly members are Republican. The high court could decide whether this is unconstitutional.

As we said, “Stay tuned!” In the meantime, if you want to know more about the case, you can check out information from the Brennan Center for Justice.

As you can see, 1787 wasn’t really all that long ago. We’re still living with the consequences of the Framers’ decisions.

What you think? Should North Carolina hold new elections? Should Wisconsin redraw its Congressional districts? Let us know.