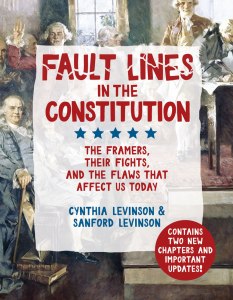 Fault Lines in the Constitution

Many of the political issues we struggle with today have their roots in the US Constitution.

Husband-and-wife team Cynthia and Sanford Levinson take readers back to the creation of this historic document and discuss how contemporary problems were first introduced—then they offer possible solutions. Think Electoral College, gerrymandering, even the Senate. Many of us take these features in our system for granted. But they came about through haggling in an overheated room in 1787, and we’re still experiencing the ramifications.

Each chapter in this timely and thoughtful exploration of the Constitution’s creation begins with a story—all but one of them true—that connects directly back to a section of the document that forms the basis of our society and government. From the award-winning team, Cynthia Levinson, children’s book author, and Sanford Levinson, constitutional law scholar, Fault Lines in the Constitution will encourage exploration and discussion from young and old readers alike.

“Opinionated, may be controversial, but should spark a national dialogue about our Constitution and the nation’s future.” —Dan Rather

“When one of the nation’s foremost constitutional scholars teams up with one of the nation’s favorite young adult authors, the result is a highly educational, readable and entertaining look at the United States Constitution, warts and all. Cynthia and Sanford Levinson’s “Fault Lines in the Constitution,”  could not be more timely and thought provoking.” — Ted McConnell, Executive Director, Campaign for the Civic Mission of Schools, Assistant to Chairman, Commission on the Bicentennial of the United States Constitution 1986-1990.

“A fascinating, thoughtful, and provocative look at what in the Constitution keeps the United States from being ‘a more perfect union.’” —Kirkus Reviews, STARRED REVIEW

“Insightful… Much food for thought on the application and relevance of many of the Constitution’s stipulations. Essential for class discussions, debate teams, and reports.” —School Library Journal, STARRED REVIEW

“Lately there’s been dismay that civics, government, and history have taken a backseat in classrooms. This smartly conceived book goes a long way toward reintroducing students to those subjects….the Levinsons link both history and current events as they offer an illustrative group of examples that show where the Constitution got it right—and wrong…. Although the font, charts, and well-written text make this appealing, it’s not always an easy read. It is, however, an important one.” —Booklist, STARRED REVIEW

“Interest-piquing anecdotes open each chapter, the effects of the Constitution’s provisions are dramatically summarized in poster-like illustrations, and the ensuing discussions…are both cogent and highly readable…thought-provoking and exceptionally topical” —Publishers Weekly, STARRED REVIEW