Many people convicted of felonies have committed serious crimes involving violence, such as murder. Others, though, have not. For instance, the television chef and home entertainment expert Martha Stewart is a felon because she lied to an FBI agent about charges regarding buying and selling stocks. Some felons are sent to federal prison for many years, even for life, while nonviolent offenders might spend a relatively short time there.

Often, convicted felons lose not only their freedom but also their right to vote. Forty-eight of the fifty states limit or completely deprive them of this right. Fourteen states automatically restore the franchise upon release from prison. Two states, Maine and Vermont, do allow imprisoned felons to vote.

The argument for restricting voting is that people who are unwilling to follow the laws shouldn’t be able to elect the people who make them. Some supporters of this position are concerned that convicted criminals might vote for candidates who are soft on crime and, once elected, will send fewer people to jail and for shorter terms.

Opponents, on the other hand, point out that formerly incarcerated people who have completed their sentence should be allowed to return to full citizenship, including getting back their right to vote. When the state legislature in Maine considered changing its constitution in 2013, a newspaper editor wrote, “Removing the right of some inmates to exercise their legal responsibility as voters in a civilized society would undermine that civilized society.” 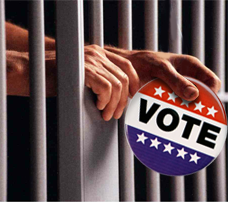 As we explain in Fault Lines in the Constitution, access to the polls varies from state to state. Officials can make it harder or easier depending on the kind of identification they require to register, where the polls are located, how late they’re open, and other factors. The reason for these differences is that, back in 1787, the framers who wrote our Constitution didn’t want to get into arguments about who was qualified to vote. So, they left the decisions up to the states.

Until well into the next century, none of them denied the vote to felons who had served their time. By the 1870s, however, many did so. The reason was probably to prevent African-Americans from going to the polls, a right they were given when the Fifteenth Amendment was ratified in 1870. Such racial discrimination appears to continue. Today, about six million current and former felons are not allowed to vote; a disproportionate percentage of them are African-Americans.

In 1974, the US Supreme Court upheld the right of each state to decide whether felons can vote. Thirty years later, a study found that states with the largest population of African-Americans passed the strictest laws denying the vote to convicted criminals.

What’s the situation in other places in the world? More than twenty countries, including Canada, Germany, and South Africa, do not restrict felons from voting at all, even while in prison. Ten, including India, New Zealand, and England, allow them to vote once they’re released. Only three countries—Armenia, Belgium, and Chile—ban voting for life.

So do several states within the United States. Virginia had been one of them—unless the former prisoner was pardoned by the governor, which a dozen states allow. In 2017, Governor Terry McAuliffe restored voting rights to 168,000 Virginians with criminal records. About a quarter of them registered to vote in that state’s hotly contested November election to pick McAuliffe’s successor.

Some Americans think that no prisoner should be barred from voting. Others believe this is true only for nonviolent criminals. A poll in 2016 showed that, overall, nearly three-quarters of Americans believe that people who have committed felonies should be able to vote after they’ve served their time.

What do you think? Should a convicted criminal be barred from voting? Ever? Never? You can find your state’s policy here.