“Lynn Tanaka reporting from New York. Although polls closed three hours ago in the East, results in the presidential race are still rolling in, and it’s impossible to offer even an educated guess as to who will be our next president. Third-party candidates are pulling so many votes away from the front-runners on the Republican and Democratic tickets that this election just might signal the end of our two-party system.

“Just to remind our viewers, John Kasich, the former Republican governor of Ohio, created the American Unity Party after the Republican convention last August. Kasich and his running mate, who was previously a Democrat from California, have carried Ohio! They didn’t get a majority of the votes but they came in first since most Ohio voters were split between the two major parties. As a result, American Unity gets all of the state’s eighteen Electoral College votes.

“And Kasich isn’t the only third party to make such a splash. The Libertarian Party could carry New Hampshire’s four votes, and the Socialist Party could get Vermont’s three—even if neither party draws most of the popular votes. If third parties continue to do this well out west, they could collect enough Electoral votes to deprive any candidate of a majority. That’s a big reason we don’t know who will win this election.

“To explain why this matters, let’s call in an expert, Professor Sanford Levinson.”

“You’re absolutely right, Lynn. The Constitution states that, if no presidential candidate gets a majority in the Electoral College—that is, 270 votes—then the House of Representatives chooses the president.”

“Professor, how exactly does that work?” 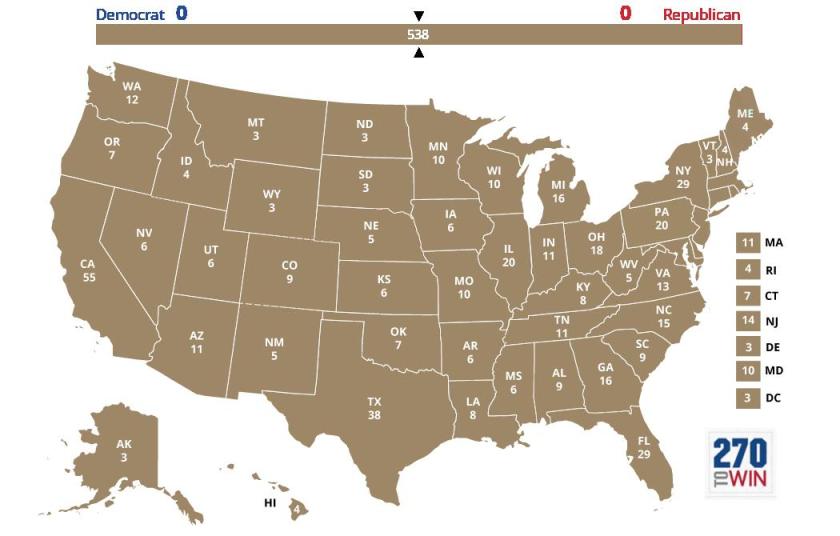 “The newly elected House of Representatives that takes office on January 3, 2021, would hold a ‘contingent election’ to determine which of the top three presidential candidates gets to move into the Oval Office on January 20. Here’s the tricky part: every state gets one vote, no matter the size of its population. So, a majority of each state’s representatives have to agree on one person. That’s simple in Wyoming since it has only one representative. But, if a majority of the representatives within larger states can’t come to agreement, then those states can’t cast a vote.

“A lot rides on the current House elections, then. Let’s go to Cheryl Garcia in San Francisco for an update on those.”

“Well, Lynn, voters seem to be as divided regarding the House of Representatives as they are on the White House. Our projections show that Democrats will retain the majority of the seats overall. But, in terms of choosing the next president, what matters is the makeup of each state’s delegation. California seems to be voting solidly Democratic. However, there are at least eight smaller states that have an even number of representatives, half of whom are Democratic and the other half Republican. We don’t know how they’d settle on a president. It looks as if this election won’t be over this year, let alone tonight!”

This particular scenario for the 2020 presidential election may be unlikely, but it is definitely not impossible. As of April 2019, eighteen Democrats, two Republicans, and an Independent have officially declared their intention to run for the highest office. Political pundits have also thrown around dozens of other names. Only one Democrat and one Republican will get the nominations at their conventions in the summer. Instead of lending their support to these major-party candidates, the losers could establish their own parties and run against each other and the major party candidates.

After all, something similar has happened before.

The House of Representatives did choose the president following the 1800 and 1824 elections. Originally, members of the Electoral College voted for the two people they thought were most fit. The winner became president, and the other became vice president. That proved problematic, as we explain in Fault Lines in the Constitution. The Twelfth Amendment changed the system so that presidents and vice presidents were chosen separately. If none of the presidential candidates received a majority in the Electoral College, the House would pick their favorite among the top three vote-getters.

That was important in 1824. Andrew Jackson got the most votes—both popularly and in the College—but not a majority. A deal between two other candidates led the House to hand the presidency to John Quincy Adams.

The presidential election could have landed in the House again in 1948. Two small parties—the Dixiecrats and the Progressives—ran candidates who drew some votes away from the Democrat, Harry S. Truman. The Dixiecrat, Strom Thurmond, prevailed in four states, winning thirty-nine Electoral votes. Truman took three states—Ohio, California, and Illinois—by a margin of less than one percentage point apiece. Had the Republican candidate, Thomas Dewey, won even one of the three, the election would have been thrown into the House.

Twenty years later, history practically repeated itself when Alabama Governor George C. Wallace, running on the American Independent ticket, scored nearly ten million popular votes and forty-six Electoral College votes—a record for a third party. He didn’t expect to win but his strategy was to keep the major party candidates—Republican Richard Nixon and Democrat Hubert Humphrey—from getting a majority. Wallace might have succeeded had a relatively few votes gone to Humphrey instead of Nixon in some of the states he carried.

Does This System Make Sense?

It’s possible that, because of the appeal of third-party candidates, no one will get a majority of the Electoral College. Then, if the twenty-six smallest states, with far less than half the national population, agree on a single candidate, that person would become president.

The result would be constitutional. Would it be fair? Would any person, designing a constitution from scratch in 2019, choose such a system to pick a president?