Most elections in America take place in even-numbered years. But, a very important one is happening on November 7, 2017. That’s the date New Yorkers will vote on whether to hold a constitutional convention. Thanks to a provision in their state constitution, citizens there decide every twenty years whether to consider changes to their founding document. One of the co-authors of Fault Lines in the Constitution—Sanford Levinson—is very much hoping they do.

The final chapter of the book includes a debate between Sandy and Cynthia about whether Americans should hold a national constitutional convention to revise the US Constitution. If you listen to the audio version of Fault Lines, you can actually hear us debating.

At the first—and, so far, only—constitutional convention in 1787, the Framers figured they weren’t getting everything right. They predicted that the document would need to be changed over time. So, they wrote Article V, which states that Congress must call for a new convention if two-thirds of the states (today that’s 34) petition Congress to do so. There is an effort, sponsored mostly by political conservatives, to encourage such petitions. About a dozen more states are needed to make it happen.

Sandy has been pushing for a national convention for over a decade. He believes that the fault lines in the Constitution are so severe and that the amendment process is so cumbersome, the only way to fix it is to start over from the beginning. Cynthia, though, like most of his friends, colleagues, and family members, is opposed. They all worry not only about what a new constitution would look like (more limits on immigration?) but also how we’d even agree on who gets to go to the convention. 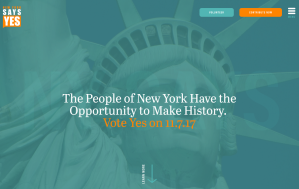 New York, however, has answered some of those questions. If a majority of voters support a state convention, then an election will be held in November 2018 to choose two hundred delegates. They will convene beginning in April 2019 and will spend several months re-writing their constitution. Just as at the national level, everything would be up for grabs. Some people hope to change the power of the State Assembly and to end gerrymandering. Others hope to revise provisions related to labor unions.

New York is not alone. At the state level, constitutional conventions are as American as apple pie. Fourteen states invite their electorates to vote at intervals of ten to twenty years on whether to hold one. Oklahoma is among these but has apparently ignored that part of its constitution. Over the past 230 years, there have been approximately 235 state conventions in the now-fifty states. But no state has held one in twenty-five years, since Louisiana did so in 1992. The last one in New York occurred in 1967.

Alexander Hamilton (calling himself Publius) wrote in an essay in The Federalist that Americans in 1787 could show the world that people can engage in “reflection and choice” on how they want to be governed. Perhaps New Yorkers will make the choice to reflect on their own government.