Let’s say it’s a glorious autumn day in 1786, and you decide to enjoy the sea breeze along the bustling Boston Harbor. Frigates and merchant ships are unloading passengers and goods from up and down the coastline onto Long Wharf. Wooden crates stenciled “Magical Elixirs, Imported from Maryland” and “Settees, Imported from Georgia” are being hauled to the Customs House for payment of duties. Newcomers are startled by the swarming horse-and-buggy contraptions that clatter over the cobblestones.

“Hello, sir!” you greet a stranger. “Where do you hail from?”

“Welcome to the Cradle of Liberty,” you add.

“Thank you for your hospitality,” he says. “But already I can see that this Massachusetts is a strange country. It is far too populous for me.”

“Well,” you retort, “South Carolina is an even odder country. Why, you have slaves down there. But accompany me to Durgin & Park Tavern. Perhaps we can see eye to eye over ale.”

Obviously, we made up this scenario. But it contains some truths that both reveal where our Constitution came from and help explain why, as current events show, it’s not holding up very well.

During the 1780s, just after the Revolutionary War, people considered the state they lived in to be their home country. Having gotten rid of the king of England, they had no interest in swearing allegiance to another country and its ruler. Most thought of themselves as Virginians or Pennsylvanians, for instance, rather than Americans. Merchants even charged customs for products shipped from one state to another!

The Framers who gathered in Philadelphia in 1787 to write a new constitution for this collection of states wanted to draw the country together. That’s why the Preamble opens with the aim: “to form a more perfect Union…” At least two recent events, however, suggest that the union might be unraveling. 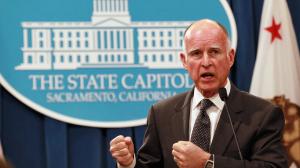 In January 2017, the California legislature banned state employees from using public funds to travel to states that discriminate against lesbian, gay, bisexual, and transgender people. By June, eight states were on California’s no-go list because they had passed such laws as allowing adoption agencies not to place children with same-sex couples and forbidding transgender people from using the bathroom of their choice. Sports fans are probably relieved that California still does allow public university football teams to play games in Texas and North Carolina, despite their discriminatory laws. Nevertheless, California, the most populated state in the country is officially spurning laws adopted in Texas, the second largest state, as well as seven others.

In June 2017, Texas Boys State—a week-long summer program in which high school juniors, called Statesmen, participate in a simulated legislative session—voted to secede. Their bill stated, “Texas…cannot in good conscience continue this tie with our former Mother country. For God and Country, The Republic of Texas hereby Declares her Independence.” After approval from the Boys State House of Representatives, the Senate passed the bill with a vote of 44-1, with 3 abstentions.

The Statesmen admitted that they were more interested in being the first group to pass such a bill than in actually urging Texans to secede. Nevertheless, their action shows that the topic is ripe for serious debate. They are, after all, politically active and will be eligible to vote in just several years.

There’s no chance that the citizens of Texas or the Legislature would actually vote to secede. However, in 2016, Republican Party conventions in at least 10 out of the state’s 254 counties adopted statements supporting the idea. That’s not many but it’s 10 times more than there were in 2012.

State officials and the federal government have been tussling with each other since the British slinked away in 1781. The biggest conflict occurred from 1861–1865. Now, some states are again shaking their fists at each other and at “the feds.” Secessionist movements, such as the Second Vermont Republic and the Cascadian independence movement in the Pacific Northwest, are arising from coast to coast.

Will the Constitution be strong enough to hold the country together? Or, is it seriously fraying?