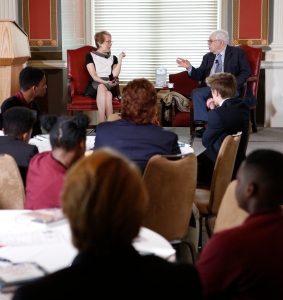 On Constitution Day 2018, we got together at the Library of Congress with students from Gonzaga College High School, Thurgood Marshall Academy Public Charter School, and Richard Wright PCS in Washington, DC. In addition to debating several issues raised in the book, the students brainstormed topics for our blog. The subject that most of the kids wanted us to write about is voting age.

Until 1971, Americans couldn’t vote until they were twenty-one years old. The Twenty-sixth Amendment lowered the age to eighteen. But, why not, say, sixteen? Or, even younger?

In our blog post “Run, If You Can!” we wrote about teenagers who had recently run for governor of their states—even though they were too young to vote for themselves. One was only thirteen. He was very knowledgeable about the issues and committed to his campaign platform. Should he and his friends and every other eighth-grader in the state have been able to vote for him? These teens did not win their elections. Maybe with more support, they would have.

Although the teens who ran for governor in 2018 lost their bids, three nineteen-year-olds who ran for elective office did win.

Voting age is an issue we would like to hear from you about. What do you think?

These are issues that might not occur to older government officials. What problems bother you that you could try to resolve in your state legislature, city council or county commission?

The most recent election saw a dramatic increase in the number and percentage of young people who voted. Nearly one-third of eligible people aged eighteen to twenty-nine went to the polls in November 2018. This rate is ten percentage points higher than that in the 2014 midterm elections. That’s the good news.

On the other hand, fifty-one percent of this age span voted in the 2016 presidential election. Furthermore, while this group is becoming the largest one eligible to vote, they also are the least likely to show up to vote.

You have lots of options! You can: